The engines that power the automobiles of today are a bit more ferocious than the 0.75hp Benz Velo that debuted in 1886 with a top speed of 10 MPH. In honor of the menacing spirit that Halloween season entails, we felt it necessary to highlight some of the monstrous engines American car companies are using to bring their vehicles to life. We’re taking a quick look at 8 American Made Monsters that deliver unnecessarily large amounts of horsepower and torque to thrill-seeking drivers.

The following list is in order starting with the lowest horsepower up through the most ominous and powerful beasts that are slashing up the roadways. So if you feel the ground shake and hear a bone chilling growl, don’t check under the bed, check the driveway.

This behemoth begins its life in a pampered manner, being hand-built by a two-person team. However, this soft upbringing does not equate to a weak mindset. The aptly named “Voodoo” engine puts out an impressive 526-hp and 429 lb.-ft. of torque and propels the ‘stang from 0-60 in just 3.9 seconds. Something not lost on Ford was the need for an optional true 6-speed manual, letting the driver take this vehicle by the reigns as it was truly meant to be. 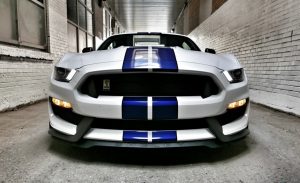 Knowing that the growl of the GT350 would be a signature, muffler bypass valves were installed to help strengthen its vocal chords. This is activated when switching from Normal to Sport-Mode, where the GT350 will then bypass the mufflers more frequently. Sport-Mode also tightens the response of the magnetically adjustable shock absorbers and lessens the power assist to the steering for a connected road feel.  In addition to this, the racing style crankshaft creates even more vibration and deep tones that bellow from the V8.

If you need even more power, and can be patient, there are rumors surrounding a 2018 Ford Shelby GT 500 that may be powered by a 5.0 Twin Turbo that could surpass the 740hp range…Scary, yet so appealing. 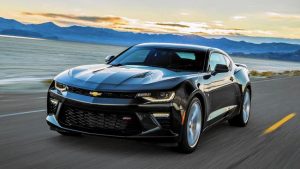 Although this menace dropped 200-lbs, the widened front fenders, 20” forged aluminum wheels, and wing-style rear spoiler add the look of additional muscle, while also providing greater stability. Chevrolet designed a new look to front-end to give the ZL1 an aggressive appearance, featuring a very large intake to keep the 640-hp V8 nice and cool. The new wavy pattern within this large intake provides some flowing lines to the rigid, angry appearance.

Chevrolet gives you the choice between a standard six-speed manual transmission with active rev matching and an all-new 10-speed automatic with paddle-shifting that helps maintain optimum RPM levels for supreme responsiveness. The performance-tuned suspension system that includes Magnetic Ride technology that adapts 1,000 times per second, adjusting the suspension for performance driving.

Cadillac’s most powerful production model ever is propelled by a 6.2L V8 that puts out 640-hp and 630 lb.-ft. of torque. This is essentially a 4-door family sedan with the power of a race car. Revised side skirts along with a lowered suspension give the road hugging CTS-V a low and wide stance that resembles that of a predator waiting to pounce. It’s the most intimidating 4-door we have seen. 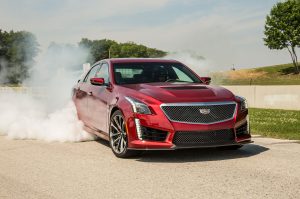 The grille a features a brand-new mesh pattern that adds the luxurious look that is synonymous with the Cadillac name. Paddle-shifters, launch control, Performance Algorithm Shifting, and a vented carbon fiber hood help to further the track appeal of the CTS-V. And if you’re more of the high-maintenance type, the luxurious interior of the CTS-V will deliver the high level of comfort you expect from a Cadillac. But don’t let this comfort fool you; this thing is uninhibited at its core. 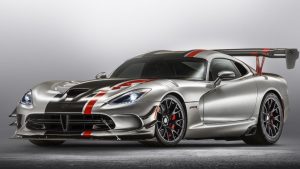 While there are numerous configurations available, the Viper shows it fangs in full force when upgrading to the $118,759 ACR. The 8.4L that powers this serpent is the only V10 on our list and is the largest passenger-car engine currently in production. This massive engine generates 645-hp and launches this from 0-60 in just 3 seconds. With a rumored top speed of 206 mph, this street legal monster can hold its own against track vehicles that are tuned specifically for racing.

The Viper ACR also holds more track records than any production car in the world with a total of thirteen road course lap records. This 2017 version of the Viper supposedly marks the end of the 25-year run for the Viper. But will it return from its lair to haunt the streets in the future? We can only hope so. 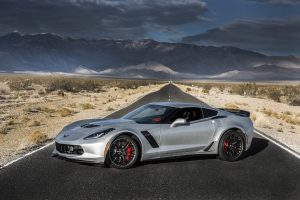 Chevrolet’s latest redesign of the Corvette is absolutely striking.  The sharp edges mixed with the classic Corvette elements pierce your inner need to drive and beckon you to monster-mash the gas. The widened rear wheels make it easier for the ‘Vette to dig its claws into the pavement and keep you losing traction while accelerating through turns. The Z06 is also equipped with run flats, just in case the road bites back.

The available Aero Package helps get the most out of the 650-hp and 650lb.-ft. of torque by adding a front splitter, aerodynamic accents around the front wheel openings, a carbon fiber hood with a large vent, and a rear spoiler for more downforce. Upgraded cooling components have been added to prevent the overheating that lead-footed drivers were experiencing with the previous model. The available two-tone red and gray GT racing seats can be paired with red stitching to ensure the interior is just as sinister as the engine that boosts this monster from 0-60 in just 2.95 seconds. 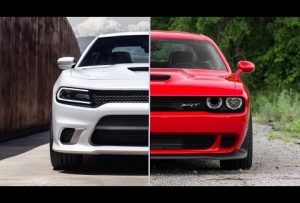 The Dodge Charger/Challenger Hellcat sounds like the stuff of fantasy, a rarity in today’s automotive marketplace, packing 707 HP with a claimed top speed of over 200 MPH. Paired with performance upgrades &  options all around, this hellion is a binge-drinking (top shelf of course) premium fuel connoisseur. The sick & twisted purr of the 6.2L Hemi Supercharged engine is no kitten. With this big-cat running the streets, it’s clear that American Muscle is dominating the streets once again just because it can; filling the driver with a perverse sort of patriotism.

While it may not have the same menacing look as the other vehicles on this list, the P90D is no pushover. This is the epitome of the saying “a wolf in sheep’s clothing.” The 90kWh twin electric motors of the P90D are said to produce 762-hp and 713lb.-ft. of torque. The Ludicrous mode upgrade decreases the 0-60 time by 10%, down to 2.8 seconds. With a quarter mile time of 10.9 seconds, this time is now 20% faster than the standard Model S. 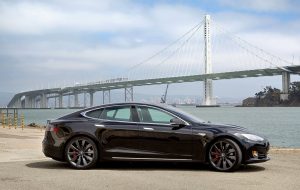 The forthcoming Model S P100D is rumored to be even faster. Early statistics show that only two production vehicles have a quicker 0-60 time; the million-dollar LaFerrari and the Porsche 918 Spyder. Quite shocking for an electronically powered vehicle (I apologize for the terrible pun).