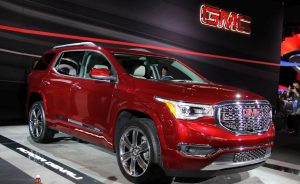 When redesigning the 2017 Acadia, GMC took the approach that many of us are trying to follow these days, shedding a few unwanted pounds. The all-new 2017 GMC Acadia has been revamped into a smaller midsize crossover in a successful effort to differentiate it from the full-size SUV segment.

This slimmed down version of the Acadia is 740 lbs. lighter & 7.2 inches shorter than previous years. It’s also 3.5 inches narrower and 3.9 inches lower, though it’s still a fairly tall vehicle. These trimmings equate to more responsive steering, better fuel efficiency, and help to differentiate the Acadia from other offerings. GMC also shaved the boxy edges of the exterior in order to give this once truck-like vehicle more of an SUV/crossover feel. GMC’s trademark squared wheel arches add some straight lines to the now curvaceous body while the redesigned front end has slightly hooded headlights for that modernized look.

Trim levels are not in short supply, as GMC is offering the Acadia in the base SL, SLE, SLT, All Terrain, & Denali, with each level having a distinctive grill. The high-end Denali (Which accounted for about 30% of Acadia sales in past years) comes with heated and ventilated front seats, with the 2nd row being heated as well. All three rows have their own climate control system and the lightly glossed wood accents afford a very natural feel to the interior. The interior accent lighting and heated steering wheel help to further the luxury appeal of the Denali.

GMC followed the emerging trend of reducing the amount of knob/button clutter typically found on the center console by integrating many of the controls into the standard 7-inch MyLink Infotainment system. The easy-to-operate system is in line with the family-friendly mindset that GMC used while designing this vehicle.

The 2017 Acadia is equipped with multiple cameras for 360-degree view of vehicle. This makes park assist and cross traffic alert additions possible. Blind spot and pedestrian detection are also available as additional options, though these seem to be on their way to becoming standardized options across the marketplace. The Acadia is the first vehicle to offer a unique feature called Rear-Seat Reminder. This feature emits an audible chime to remind the driver that there is something (or someone) in the backseat. This helps to prevent the possibility of leaving a child in a hot car, which tragically results in around 40 deaths per year.

In reducing the size and weight of the Acadia, GMC successfully threw their hat into the ring that is the ever popular midsize SUV/crossover market. The Acadia can be ordered to seat 5, 6, or 7(No more option for the 8th seat), but GMC customers looking to stick with a full-size SUV still have the Yukon as an option. This attractive midsize SUV was fitted with numerous updates to not only improve the aesthetics, but to increase the performance and safety as well. Be on the lookout for the 2017 Acadia, as you certainly will not recognize this refined offering from GMC upon first glance.