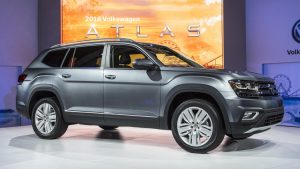 The Atlas has been in the works since 2013 and looks as though it’s finally ready to make its debut in spring of 2017. This family-oriented crossover is VW’s centerpiece in their efforts to improve both their image and US sales after the emissions scandal. The seven-passenger crossover is the largest Volkswagen ever built in the US. Both the 2nd and 3rd row seats fold into the floor, allowing for up to 96.8 cubic feet of cargo space.

The Volkswagen Atlas is powered by a 238-hp 2.0L four-cylinder engine; though there is also an available 3.6L VR6 that can be paired with VW’s 4motion AWD system (standard 4-cylinder only comes as FWD).

While VW is making it known that this all-new vehicle will be available in 2017, many details are still unavailable, including pricing, technical specs, and fuel economy. VW is looking for the Atlas to compete with such models as the Ford Explorer, Honda Pilot, and Toyota Highlander.