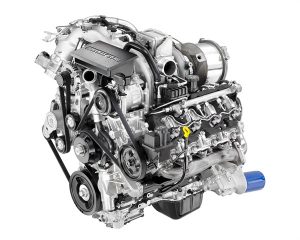 General Motors has revealed details surrounding the anticipated redesign of the Duramax 6.6L Turbo-Diesel V8 that will be available to power both the 2017 Silverado HD and 2017 Sierra HD.

The redesigned Duramax gets a 19% boost in max torque, with the maximum now being 910lb.-ft. of torque. The new engine will also deliver 445hp, up from 397. Even while General Motors upgraded the power output, they were also able to reduce the idling noise by a whopping 38%.

An all-new air intake system delivers more cool air to the engine, helping it to perform under strenuous hauling conditions. This is paired with an upgraded oil cooling circuit that supports the turbocharger. The integrated oil cooler has 50% greater capacity than the current Duramax and furthers the ability to keep the engine temperature consistent.