We are extremely proud to announce that one of EMKAY’s founders, the late Michael Braude, has been inducted into the Automotive Fleet Hall of Fame. Braude played an integral part in growing EMKAY’s presence during the early years and helped the company grow into the premier fleet management provider that it is today.

Michael Braude joins two other inductees in the 2016 HOF class. For quick a look at EMKAY’s vast history and how Braude helped to get the company, and the fleet management industry as a whole, up and running, click the link below.

EMKAY Named as a Best Place to Work in IL 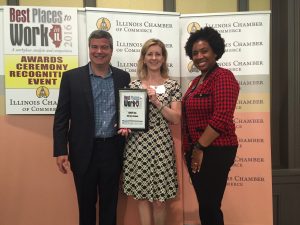 We are proud to announce that EMKAY has once again received the honor of being named one of the Best Places to Work in IL by the Daily Herald Business Ledger. EMKAY prides itself on fostering an environment in which employees can excel both personally and professionally. Awards such as this help to reinforce our corporate goal of utilizing highly satisfied employees to support highly satisfied customers.

Thank you to everyone who voted and helped EMKAY to achieve this outstanding recognition!

Continuing on the path of achieving sustained excellence, EMKAY was recognized once again by the Stevie Awards, winning awards in 4 different categories at the 10th Annual Stevies. While we are constantly working to improve our already innovative processes, these awards help to reinforce our customer service model while also solidifying EMKAY as a premier provider in the fleet industry.

The categories in which EMKAY won awards are listed below: