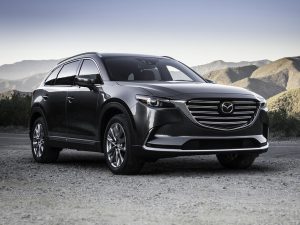 The 2nd generation of the Mazda CX-9 is here and it’s not one to miss. Mazda’s redesign of the 2016 CX-9 resulted in an artful combination of luxury-based upgrades to the interior, exterior, and the overall performance. This beautifully designed crossover is earning high marks throughout the industry and looks poised to be a contender in not only crossover market, but the luxury segment as well.

As with many new models, the focus started with the driving experience. The Mazda Connect system keeps you entertained and connected while on the road through the use of voice command, social media connectivity, HD radio, Bose speakers, and numerous other features. The well-placed 8” touchscreen that displays this system can also be controlled by a large dial set on the center console, which greatly increases the ease-of-use.

The wide center console armrest sits high alongside the low-set front seats and affords plenty of room for both you and your co-pilot to utilize. When behind the wheel you almost get a sense that the Mazda is hugging you into place, which is actually quite comforting. The look and feel of the interior is so high-end that if it weren’t for the Mazda emblem set into the steering wheel, you may think you’re behind the wheel of an Audi or Range Rover. The high level of comfort typically reserved for drivers also extends to the passengers, with the 2nd row of seats having the ability to slide and recline.

The ride is also much smoother and quieter than previous model years thanks to upgraded suspension and over 50 lbs. of sound dampening material beneath the floor. With the addition of thicker windows and better door seals, Mazda states that the CX-9 is 12% quieter than previous years when traveling at 60mph.

But don’t worry about this comforting, quiet cabin putting you to sleep. The powerful look of the front-end isn’t just for show. Mazda employed a well-placed focus on the low-end torque instead of the high RPM horsepower that would be seldom used in this family-friendly crossover. Hidden behind the aggressively styled grille and beneath the sloping hood is a turbocharged Skyactive-G 2.5L that delivers 40 lb-ft more torque than the old V6. I like to describe it as sneaky-fast. It’s not the punch you in the face, throw you to the back of your seat torque that some turbo-charged vehicles deliver, but instead more of a quick and smooth climb. It was very easy to jump 10-15 MPH without really even realizing that you had.

While the wheelbase has lengthened by 2.2 inches, the overall length of the CX-9 was shortened by 1.2 inches. These physical changes result in an athletic look and draw more attention to the attractive front-end and longer hood. However, the shortening of the vehicle did result in less room for the third row, though it’s still functional. 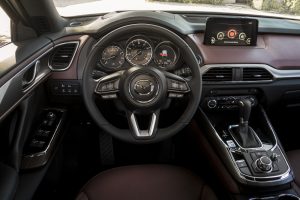 The Signature trim level’s interior rosewood paneling is covered in a very thin lacquer that allows you to still feel the grain. This high-end wood, paired with the premium Nappa leather and real aluminum accents only further the luxury appeal of the redesigned interior. Signature models also come standard with heads up display that not only presents your speed, but also shows the speed limit of the road you’re traversing, blind spot notifications, and navigation alerts. Other optional safety features include radar cruise control, backup camera and sensors, blind-spot monitoring, and a lane-keep assist feature.

While many sequels fail to compare to the original (i.e. Caddyshack II), that is definitely not the case for the 2nd generation Mazda CX-9. The luxurious look and feel of this crossover is very impressive and being that the top end trim level comes in at right around $45,000, it may even be enough to entice luxury-brand-focused consumers to switch things up.