Lincoln begins the process of differentiating their vehicle offerings from the Ford Brand with the release of the 2017 Lincoln MKZ. The partial redesign of the MKZ provides us with a look into the new direction of the Lincoln Brand, and from what we can tell, it’s a direction focused on the driving experience, luxury, and beauty.

Lincoln is further distinguishing their Brand from Ford by removing the EcoBoost label from both the marketing campaign and the actual vehicle. The badge on the trunk will now simply read 2.0T or 3.0T. The thought behind this is that luxury-minded buyers aren’t as interested in the “eco” aspect of vehicles, though it may also just be a simple way to detach the Ford and Lincoln engines.

The redesigned exterior is highlighted by a completely overhauled front end, along with sleek and stylish lines that lend a sense of both grace and confidence to the MKZ. The poorly received split-wing grille has been replaced with a single-frame grille that is reminiscent of such old-world brands as Bentley and Jaguar. This new grille helps to get rid of the pointed look that the split-wing caused and makes for a much more attractive look.

The LED headlights that flank the all-new grille offer a modern aspect to the classic look of the front end. In addition to a band of LEDs that flow along the entire base of the headlamp, there are also 4 separate rectangular lights that glow beautifully in unison with the fluid LED band.

Additional lighting upgrades include the approach detection lighting feature. When approaching the MKZ with the keys in hand, the Lincoln logo is projected onto the ground from the side mirrors and acts as an illuminated welcome mat.

While the interior update was not extensive, Lincoln has done away with the frustrating touch controls on the dash and has brought back the classic knobs and buttons that consumers are much more comfortable with.  They did, however, continue with the gear shift button tower on the dash in lieu of a traditional shift knob, though this didn’t seem to cause the same issues that the touch controls did.

Furthering the interior’s luxury appeal are such features as ambient lighting throughout the cabin (7 different colors to choose from), a standard14-speaker Revel audio system (20-speaker system upgrade available), and upgraded interior paneling materials.  The cabin also features a new brushed aluminum trim that borders the vents, door panels, and dashboard cluster. Included within the dashboard cluster is the SYNC 3 touchscreen system that links with both Apple and Android Car Play. As with the exterior, we see the seamless blend of modern and classic styles, giving the MKZ a refined look throughout. 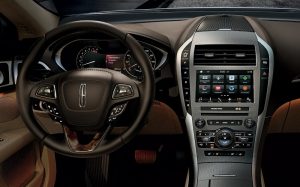 The seamless blend of modern and classic styling, power, and technology make the 2017 Lincoln MKZ a very attractive option for consumers. This is the first step in a new direction for Lincoln, and from what we can tell it should only further the intrigue around their future vehicle offerings.