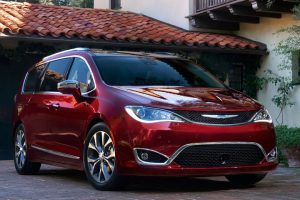 While you may recognize the name Chrysler Pacifica, the vehicle you see on the road this summer will not resemble the SUV/Minivan crossover that was discontinued after the 2008 model year. The 2017 Pacifica makes a return to the market as the all-new minivan offering from Chrysler and will act as the successor to the well-known Town & Country. The somewhat rigid exterior has been replaced with flowing lines that smoothly stretch along the exterior. The 2017 Chrysler Pacifica will be offered in 5 trim levels – LX, Touring, Touring-L, Touring-L Plus, and Limited.

The only engine offering is a 287hp V6 with 9-speed auto transmission. This provides ample power to get the vehicle up and moving, while still running at a respectable 18/28 MPG. Improvements in maneuverability are especially noticeable when cornering and parking. The better handling, paired with a quieter ride, help to make the overall feel resemble that of a small SUV/crossover; one that can handle hauling 8 people or full sheets of plywood.

Standard capacity is 7 seats, though an 8th is available to be added at all trim levels. Also standard on all trim levels is the Key-less Enter-N-Go™, Driver Door Remote Proximity, ParkView™ Rear Back-Up Camera, and power heated exterior mirrors with manual fold-away (Power fold-away on the Touring-L Plus and Limited trim levels).

Chrysler was sure to focus on the safety of the people-hauling Pacifica. In addition to standard front impact airbags, Chrysler included seat-mounted driver and passenger side-impact airbags, curtain 1st, 2nd, and 3rd row overhead airbags, and knee airbags.

The motorized sliding doors open with the touch of a button. (Standard on all levels except for the LX). A hands-free feature also enables you to open both the sliding doors and the rear lift gate with your foot. (Available on the Limited trim level). Simply wave your foot below the side sill/rear bumper while the key fob is present and the doors will automatically open. The Limited trim level also separates itself by offering standard high-end options such as a heated steering wheel, (also standard on Touring-L Plus), heated front and 2nd row seats, a built in vacuum, an integrated navigation system, touring suspension, and a tri-pane panoramic sunroof. 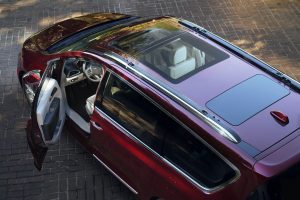 Chrysler has also announced plans to offer a plug-in hybrid van in late 2016, which would be the only one in a class that has never offered a hybrid. The estimates at this time are at 30 miles of all-electric range before reverting to a gas-electric hybrid operation.

It’s clear that Chrysler tailored the Pacifica towards families with ease-of-use, safety, and convenience being at the forefront of their design. The 2017 Pacifica is being received very well throughout the industry and looks as though it’s poised to make a strong return to the market in the coming years.